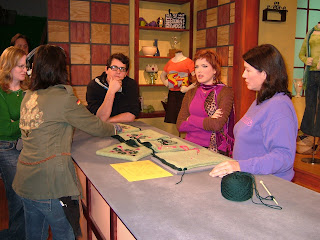 Producers, art dept. and me, walking through a Knitty Gritty Season 4 segment with guest, Kelley Deal.
Hey all.  An interesting conversation started via Twitter & Facebook a couple of days ago, when a viewer asked when there’d be more Knitty Gritty and Stylelicious episodes.  At the end of the thread, I tried to answer the question as best as I can.  I thought I’d post it here, for those of you who’re interested in the subject of why craft shows seem to be a thing of the past on network television.  xx, Vic

QUESTION from @PeppermintKnits (via Twitter): “@VickieHowell are they still making Knitty Gritty?”

ANSWER:  Nope. DIY cancelled all craft show production 2 yrs ago.
Comments:
Karen Daniel:   “Booooo.”
Kelly Bronsink:  DIY seriously sucks now. I am sick of all of their stupid home improvement shows all the time. I have emailed them, but they dont’ seem to care.
Marie Runyan:  I agree, I live in an apt. I cant do all thos “home” improvments. DIY sucks.
Sondra Knight Casario:  No wonder I haven’t been able to DVR it lately!! Bah humbug. Now all they have is sucky home shows. I loved Stylelicious too, Vickie! Dizzam!
Claudia Berry: I’ve emailed them, too, everything is tear up your home and tear up your yard, ugh.
Lynn Thomas:  I totally agree with everyone….DIY and HGTV have cancelled all craft shows…..so naturally I have stopped watching them both!!! 🙁
Janna Coumoundouros Bissett: I noticed that-what the heck? Don’t they realize how “hot” crafts are lately?
Veezie Lu:  a network called diy without craft shows is like a newtork called music television that never plays videos!! lol i guess this is the business… so when will hgtv and diy and style and them go, shit we need a craft network. CrafTV! knitting shows, carol duvall, martha crafts, stylicious… man, they could give each person on the austin craft mafia their own show, and that would be enough for me!!

Janna Coumoundouros Bissett: Ooooh-Craft TV-I like it!! My DVR would be full with that on!

Kelly Bronsink: TOTALLY! Where do we sign up for that channel???

Jenn Mainwaring:  DIY, HGTV… all those channels are about home improvement. I don’t know about anyone else, but I live in an apartment that we can’t do too much with, so I would like my craft shows back, please!


Karen Robins:  I miss my Friday dose of fiber
Jennifer Aguirre:  Very upsetting…loved my knitting shows.
that’s why i love craft corps...
Vikki Jaskolka Cerbin: They were running the reruns of Knitty Gritty on DIY until about 3 weeks ago.
Veronica Iraheta:  I add to the voice… how much home-destruction-reconstruction can someone watch at a time? Our crafty side calls for attention! Does somebody know a TV hot-shot we can contact with a gazillion signatures? Even if it’s not DIY or HGTV?

Michele Gregory:  I would sign that in a second; I miss all the craft shows. It would be nice to see a show where one can actually do the project without taking out a second mortgage.
Merry Gay Lape:  You would think the whole world revolved around home improvement. That’s all you see on there anymore.
Vickie Howell:  Karen– Once you left DIY, so did all the craft enthusiasm, unfortunately. You were our biggest champion. 🙂
Everyone else–There actually was a petition started by someone on Ravelry about a year ago. It didn’t do any good, though. Various other executives I’ve worked with have been trying to start a Craft Network for years now, but haven’t been able to make it work.
As far as the over abundance of home improvement shows vs. the ghost town that is craft programming right now, well, the bottom line is what brings in ad dollars. My take on it is that companies like Home Depot & Lowes have the millions of dollars to spend on commercials, which they’ll happily spend on a network devoted to their demographic. Unfortunately, there aren’t those same deep pockets in the craft world. Sponsoring shows on PBS is more craft company financial speed. To make the whole thing work, and this is just my opinion, a network would need to be able to make the investment of time and creative selling tactics to show major non-craft companies the value in tapping into the DIY market. Maybe Michael’s can’t commit to a 10 million dollar TV campaign but Apple Computers might be able to team up to promote watching web tie-in videos on iPhone, or Procter & Gamble could sell their cleaning supplies under the tagline, “Sometimes being… Read More creative, is a messy business!” Since the philosophy of making things oneself is back in fashion thanks to the economy, I do believe that craft shows will eventually resurface and when they do I’ll hopefully be one of the people there to welcome you to their first episodes. 🙂
I personally think though that before the TV world comes around, the next major wave of craft programming will be broadband related. The challenge we’re all having in making that happen is how to pay for it. Because for the most part people expect things on the web to be free and advertisers want to pay pennies on the dollar for web ads, it makes it difficult to figure out how to pay a production team and a host. I’ve had a couple of opportunities present themselves but under the guise that I’d work for free to begin with and see what happens. I’ve paid those dues long ago, though. Besides, one of my personal missions is to promote the value of craft which can’t be done if I don’t value my own work.
This was a much longer post than I’d intended, but I want you to know that I deeply care about the subject and am doing what I can to bring as much DIY goodness to you as I can. 🙂
Thank you so much for your loyalty & support!
To see more of this thread with continuing dialogue, go to my Facebook page.

6 Responses to “Where did all the Craft TV go?”