I’m back from Columbus and in some sort of weird cosmic shift towards the positive, I didn’t get stuck in the Atlanta airport in EITHER direction of my trip.  But wait, that’s not all!  I also finished a beanie for my friend Steve’s new son during the flight which means, I may actually get a baby gift to its recipient while he still in fact, is a baby.  Buy a lottery ticket, people! 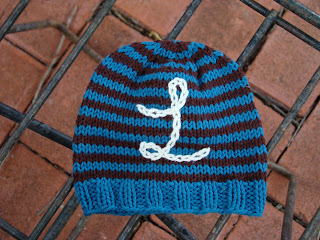 Leo’s Hat
Yarn: VHC Craft in colors: Todd & Allison.
Needles: Size 6 12″ circ & dpns
CO 60 sts with 1st color, join.  Work in 2×2 rib for 1″.    Join 2nd color & knit 2 rows.  Carrying yarn on the inside, switch back to 1st color and knit 2 rows.  Continue knitting, alternating colors every 2 rows until piece measures 4 1/2″  Decrease by *k4, k2 tog around.  Knit 1 row straight.  Repeat last 2 rows, except knitting 1 less stitch btwn k2togs, until you only have 10 or so sts left.  Cut yarn, run tail through live sts and cinch closed.  Embroider monogram on, using chain stitch.  But I digress.
This TNNA (National Needle Arts) convention was pretty mellow for me, which was really nice. I got to wander the aisles with my editor looking for yarns for Eco-Stitch (my next book), and was really excited about a few of the “green” fibers I found. I also grabbed a bunch of books, tools, accessories and bags (the latter of which I love so much it hurts) that I’ll be reviewing over the next few weeks on CraftGossip. Stay tuned!
I’ve never been to Ohio and although I’ve heard that Columbus is really crafty & cool. Unfortunately though, this “view” from the 20th floor of the Hyatt is pretty much all I saw of it.  It looks flat and cement-y. 😉 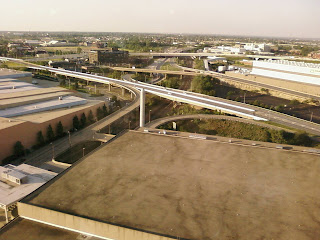 There’s something very strange about craft conventions when you work in the industry.  It’s kind of like camp.  You see the same people in San Diego, Atlantic City, Long Beach, Las Vegas, Atlanta & Columbus where you eat, sleep and yarn all within 1 square block of each other. When I arrived at the hotel, happy hour was already in full swing so I sat down to catch up and talk shop with Brett Bara, Candi Jensen, Kristen Nicholas, Nicky Epstein and Trisha Malcolm. It was good seeing everyone, but I was bummed to hear from Trisha that Knit.1 issues are being cut down again!  I posted about it here.
I had 3 separate signings for Knit Aid while I was there, where people were so lovely!  I really appreciated shop owners telling me they’d sold all of their copies in 2 days or editors telling me that they actually kept my book instead of passing their comp copy along.  I’m not used to having a mainstream-ish book that’s well received.  I could get used to this! 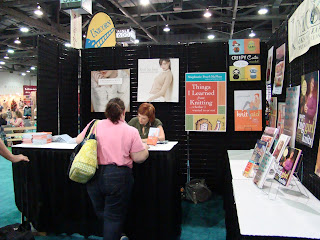 Because I didn’t have much of an agenda for this show (other than trolling for products to review & yarn to play with), I completely spaced on the fact that I probably should’ve reached out and tried to meet-up with people I was hoping to hang out with.  I briefly ran into Annie Modesitt, Stefanie Japel and Jesse from Ravelry–all of who I would’ve loved to grab a drink or coffee with, had I planned ahead.  Alas.
I did however, spot a cardboard rendition of Fabio in a cashmere scarf so really, I can’t complain. 😉 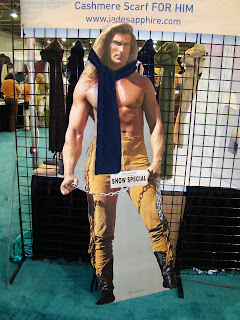 The one time I did venture out of the convention-and-adjoining-hotel-compound (which P.S., was totally ill-prepared for feeding the amounts of people involved in a convention even though the very usage of the word “convention” in the title of their building would suggest that they had fair warning), was for a fantastic dinner with Drew Emborsky, Valerie (my new editor) and the Sterling publicity peeps.  We went to a swanky neo-vegan restaurant that we’d all read about in an article on Columbus in BUST Magazine called, Dragonfly.   My lord, it was delicious!  We ordered 1 of almost everything on the menu and shared it family style.  This included: pepperjack & asparagus pizza, pistachio pepperjack ravioli, gold potato gnocchi, hon shemjii calamari and organic red wine.  Yum and yum! 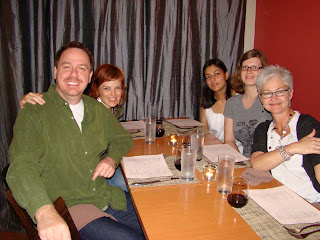 The show ended for me with a morning interview over coffee with Drew (aka The Crochet Dude) for CRL, for an unplanned episode that will also include my fall yarn trend observations from TNNA.  That is, if I can figure out how to get the rest of the podcast recorded with two, loud boys out of school on summer vacation!
Ok, eyes are burning, so I’m going to hit the sack.  For those of you in my neighborhood, I’ll be on Fox 7’s Good Morning Austin tomorrow at 8:45 am.  And scene.
xo,  Vickie