Wowza guys! Last week in only it’s 2nd episode running, my podcast CRL was #1 in the hobbies section on iTunes. This week, before we’ve even put the next episode up (coming Thursday to an MP3 player near you!), it’s holding strong in the top 2 posistion as a “New & Notable” podcast in the genre. Thank you so much for listening and spreading the word. You guys put the ROCK in Craft.Rock.Love! 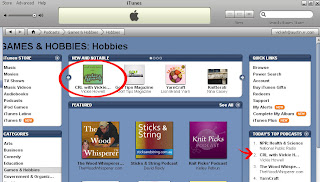 In unrelated news, I learned something interesting from the V.P. of Programming over at DIY last week. Now that the network gets ratings, they have the ability to learn all kinds of facts about who their actual viewers are (before they relied heavily on website traffic to determine which shows were popular–which because knitters are in his words, ” a loyal and very vocal group” put Knitty Gritty on top of they’re radar.), and when they’re watching. What they found from this is that their daytime viewers aren’t in fact largely young to middle-aged women as they assumed (I knew this because well, we all have jobs and kids who keep us away from the TV until we crash in a heap on the couch at night, but nobody asked me) but in fact, retiree-aged men who prefer renovation shows over craft programming. They also found that the mostly female audience who watch shows like Knitty Gritty, Uncommon Threads, Craft Lab and Stylelicious tend to TiVo those shows anyway, so it doesn’t really matter what time they air them. Soooo, that said, they’re going to start rotating our shows in an early morning spot. Beginning in January, my show and Uncommon Threads will air in what I call the “L.A. Party Girl/N.Y Power Riser” time spot of 2amPT/5amET.

It’ll be interesting to see how DVRs inadvertent partnership with Nielsen changes the way programming and advertising work together in the future and how, if at all, this new wave of monitoring will change the fate of “real” TV personalities with major network shows. Will Oprah make just as much money being played on demand as she does showing up on our TVs every afternoon? Will young starlets be shooting interviews at their convenience with the knowledge that people can just set up to record shows containing their names? Will they have to work harder to make sure people actually know their names rather than just recognize their faces? Inquiring minds…inquiring minds.

Alright, I’m off to work on the next KIWI Eco-Craft column and check on how the engineering process for this week’s CRL episode with SNL’s Will Forte is coming along. Stay tuned!