I’m leaving tomorrow, a few days than earlier than originally planned, for the Tori Spelling/Knitty Gritty Special shoot/Knit.1 interview. This may not be the best plan I’ve ever had since we’re having our post-elopement reception a week from this Saturday and we’re still not finished thrifting for plates, the kids don’t have their outfits (why is it so flippin’ hard to find little kid short-sleeved button downs in gray or black?!), I don’t have my shoes, random rental stuff still needs to be confirmed, etc., etc., etc. However…When one gets invited to do something great for charity with a bunch of smart, strong, successful women, one does not turn it down.

This Saturday, Hollywood for Habitat for Humanity will be holding their annual all-female build called, “Power Women, Power Tools”. I’m so excited! 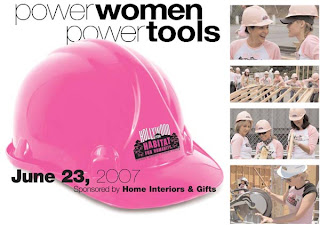 I’ve wanted to do something for Habitat for a long time, but just haven’t made it happen. And no, I don’t have any experience building…but I’m crafty, so that has to count for something, right? 😉 Adrienne (co-owner with her husband Billie Joe, of Adeline Records) is co-hosting the event and was kind enough to include me. Her family has done a lot of work for the organization in post-Katrina New Orleans and she’s now apparently got the building bug. She even bought her own hammer and, upon my coaxing, has purchases pink tool belts! I’ll wear mine proudly. 🙂 I love it when women use their powers for good!

Speaking of the power of women, I think I mentioned/thanked you all in a previous post for making Knitty Gritty the #1 searched for term on the DIY Network site. Clearly, a little knitting show doesn’t garner more viewers than say, a home improvement or automotive show, but you all have proven to be way more tenacious than others are about searching out info on a subject you’re passionate about. There’s great strength in that. Unfortunately, the voice of Knitty Gritty’s mostly female viewership (or any of the other DIY craft shows, for that matter) has not rang through as clear when it comes to ratings. Nielsen has shown that the network’s audience is overwhelmingly male’s who watch Fix-it shows. That said, although KG is still strong for them in the genre they’ve found that re-runs do just as well for them as new shows so we won’t be going into production this year. It will still be on 5 days a week but at least for 2007, the majority of the shows will be re-runs. I’m very curious about how Nielsen box recipients are chosen and how accurate ratings are in this technological age when people are DVRing or often, watching at least parts of shows on the internet. Do men monopolize TV ratings power, or do women have as much ad revenue influence there as we do on-line? I suppose, there’s only one way to find out. If you’re a woman with a Nielsen box in the house and you enjoy Knitty Gritty, Craft Lab, Uncommon Threads, etc., then you can help ensure new episodes of the shows for 2008! Tune in and tune in often. Thank ya, kindly.

Keeping with the theme of today’s post, I blatantly copied Jennifer Perkins’ (one of my favorite powerful women) brilliant idea for the wedding terrarium she made for our friend Susann, and made my own at a floral arranging class I took last night. I couldn’t bring myself to do a traditional, silk flower arrangement but this my friends, was right up my alley! 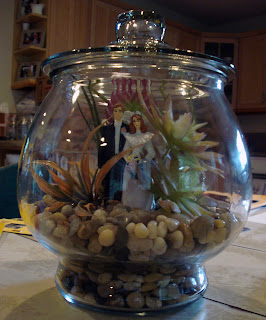 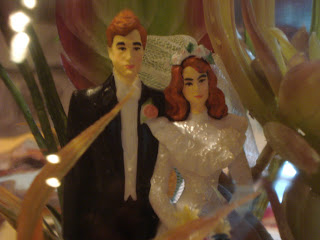 Unlike Jennifer’s version, these succulents are fake and will likely survive my black thumb and, of course, I had to paint the bride and groom’s hair red. This baby will be prominently displayed on the buffet table at our party. Viva las tacky decor!

26 Responses to “The Power of Women”