On Friday night, Dave took me to our favorite theater Alamo Drafthouse, for dinner and a movie. It was the opening night of Knocked Up so in true Alamo form, celebrations commenced. The theater tables were strewn with condoms and lubricant samples, pre-show reproductive health videos from the 70’s were playing on the screen and NARAL was there holding condom races and a Reproduction Trivia game. It was good times. If you’re a fan of last year’s 40-Year-Old Virgin, or 1999’s Freaks & Geeks (both babies of director, Judd Apatow), then you’ll love this movie! It’s smart, well written/directed/acted, and hilarious.

Speaking of hilarity, tomorrow is my kid brother’s 29th birthday. That’s not the funny part. Wait for it…wait for it…

Ok, so for years, he’s been lamenting about how great Underoos were when we were kids and why didn’t they make them in adult sizes? You can hardly blame the guy. I mean really, who couldn’t benefit from secretly feeling like a crime-fighter under their civilian garb especially, if they once looked like this in their superhero skivvies?

I am Wonder Woman, hear me roar!

Well, young Kevin no longer as to wallow in nostalgia because for his b-day, I have located a reproduction of the Superman set you see in the above pictures IN MAN’S SIZE LARGE! 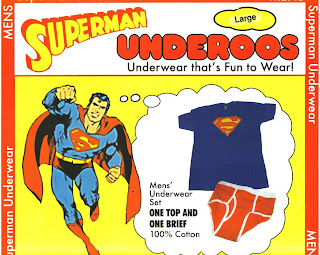 In a perfect world, he’d wear them under his firefighter uniform and rip off his coat to reveal the “S” emblem as he’s rescuing a young child from imminent danger. The Foo Fighter’s, “There Goes My Hero” would be playing in the background.
In reality however, the unopened package will likely sit on a shelf somewhere at his place. He’ll glance over at it often though, giving its existence his trademark smirk. He may even giggle (well, only on the inside) and really people, what better gift is there than laughter? Happy birthday, bro!

Have a nice Sunday.