Mar
16
The South by Southwest Music festival officially wrapped yesterday and as the city recovers from the aftermath of a million-person party and collective hangover, I wonder what it must be like for outsiders who descend onto a normally mellow Austin for just this one, crazy week.
As I mentioned plans for in my last post, we only ventured out to a few event to support friends.  All in all, we had a blast and are ever grateful to those artists and musicians who continue to inspire us.
Our first stop was on Friday to meet-up with my dear friend Victoria’s husband, Marko who was here with his side project band, The Playing Favorites.  They played, along with several other bands at the Suburban Home Records party at Head Hunters. 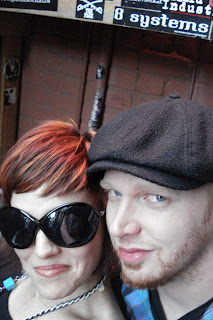 Dave & I at Head Hunters before Joey Cape acoustic set.
Although the venue was kind of slumming it for them, it’s “intimate” layout made for perfect, badly shot & edited video making for me.  You know how I loves me my new Flip camera and am continuing to attempt to learn iMovie–so here are couple more videos for your viewing pleasure.

“A Whole Lotta Nothin” by The Playing Favorites, ATX 3/08

On Saturday, we swung by the Bust Magazine party that was somewhat like a mullet haircut: (crafty) business in the front, and party in the back. 🙂  The Austin Craft Mafia co-sponsored the event (organized in large part, by Jennifer Perkins) which had booths and craft stations in the front room and music and bevies in the back garden.  Elijah Wood was the guest DJ–I had to restrain my husband from bringing his entire Lord of the Rings box set to the party, so that the fan boy levels could maintain a solid “6” on the scale, rather than hitting an “11”. 😉 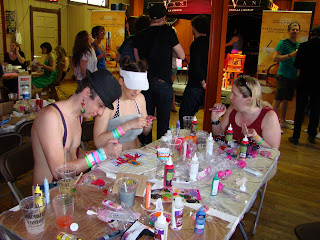 Front room at the Bust Magazine party was set up with Crafty Chica’s paint-your-own tote bags. 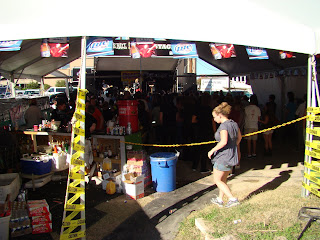 Back patio at Bust party, where bands and djs played. 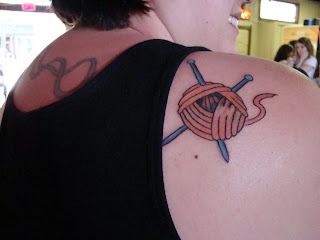 Just in the nick of time, I finished presents for the Deal sisters.  Our last SXSW stop, was to see them & the rest of The Breeders kicking off their new, much anticipated cd, Mountain Battles at the ginormous Waterloo Park all-day extravaganza. 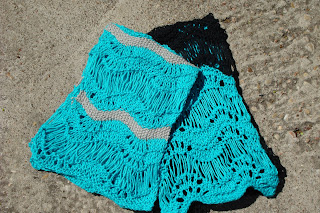 Scarves for Kim & Kelley, knit in their namesake color of ROCK yarn.

It was a kick-ass show.  They played a couple of oldies but goodies (Cannonball, No Aloha, Title TK, etc.), and a bunch of new stuff including Bang On which manages to be both raw and danceable at the same time.  I can’t wait to hear the whole cd!  In the meantime though like the rest of the the world, I’ll have to be satisfied with what’s on their MySpace page.  Alas. 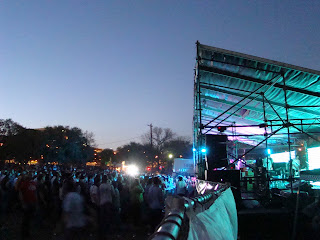 Dave’s view of Waterloo Park from back stage. 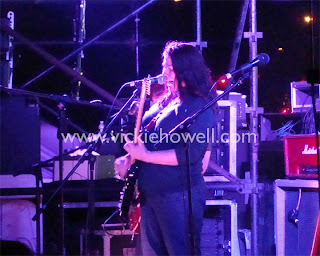 Kim (Kelley’s twin sister, and also legendary bassist for The Pixies) singing.
Before being swept off to do a myriad of post-show press stuff at their hotel, Kelley & I had a little time to hang out, catch up and talk knitting.  We’re hopefully going to get the opportunity to do a little more of that, this summer.  Oh, and I just saw the pdfs of her upcoming handbag knitting book…and it’s AWESOME.  I can’t wait for it to hit shelves so you all can see it! 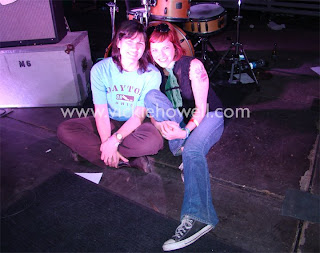 Kelley and me on one of the stages.
That’s it for me.  I’m off to go work on the next KIWI column project which was technically due, uh, today–and then pack for a quick trip to North Carolina tomorrow.
Knit on.  Rock on.
xo,
Vickie
myspace.com/vickiehowell
Ravelry: VickieHowell
Flickr: CraftRockLove
YouTube: VickieHowell
P.S.  Still reading?  All posters names over the next 3 days, will go into a drawing for a “Lemon Drop” scarf kit (yarn & pattern) knit in colors:  “Kim & Kelley” & “Trent” (seen in the picture about, left-side).  Post now & win!