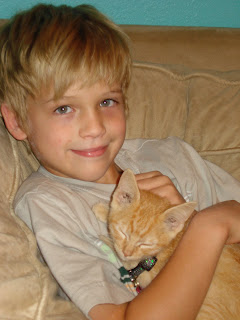 Our wee, baby cat Seamus lost his struggle last night. He was a very sick kitten and even after 2 days on an IV and intensive care, his body continued to shut down on him. In the end, he got down to under a pound, his lungs began filling with fluid so he was unable to breathe, and his temperature was so low that even with a warming bed and blanket he still shivered. It’s likely that he also had some kind of congenital disorder disrupting his digestive system. The kids were able to say goodbye to Seamus, but waited in the vet’s lobby while Dave and I stayed with him until he was gone. The doctors and staff at the AM/PM Animal Hospital were all amazing. I’m so glad he spent his last hours in a place with such good people. Special thanks to Dr. Smith (who attended to him when we first rushed him to the hospital), Dr. Parker who aided us in working with the shelter to get him all of the medical attention he needed) and Dr. Renner who shed tears for him and relieved him of his misery in the end). We’re so grateful to you all.

It’s funny, I’ve never really considered myself a pet person, per se. When you’re with an animal when he dies though, you see how similar they are to us and what amazing creatures they are in their own right. He was only in our home for a few days, but we all loved the little guy very much.

I know that most of you who read this blog do so for knitting content and light-hearted fodder, but we really appreciate the well wishes that were sent while our cat was sick. Thank you.