Last night I got back from a quick trip to Indianapolis for another Knitty Gritty special shoot, this one featuring the Naptown Roller Girls. Once again, I have the most random job ever although arguably I’ve been preparing for it my whole life–and not just for the obvious reasons like being raised crafty, a brief stint in the school drama club, or spending a few years working in the entertainment industry. Sure, those things helped but really for this particular shoot, it was my time spent from ages 6-8 as a demonstrator at the local roller skating rink in Broomfield, Colorado that got me through the night. Well that, and the fact that Amy Goeglein and I used to pretend that we were born on wheels. But I digress. 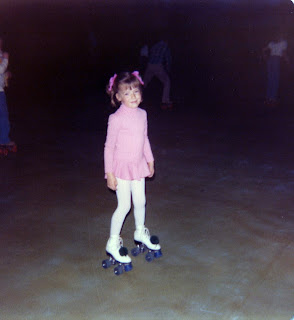 (My duties during the lesson that broke up the Saturday open-skate session included: demonstrating the T-stop, demonstrating the “sitting duck”, leading the Hokie Pokie and bringing out the free, be-candled hostess cupcake to any skaters with birthdays. I was compensated with free admission to the rink. Notice the fancy pom-poms my mom made for my skates. ;-))
I first met-up with 1/2 of the team at the Strange Brew coffee house (owned by derby member Toni–aka Joan of Dark– and her husband), for an informal interview and Stitch N’ Bitch session. They all knit together almost as often as they skate together. That’s good stuff, people! 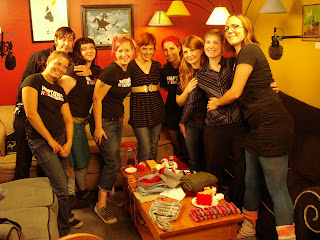 (With Alice in Rollerland, Joan of Dark, J Roller, Strawberry Jam, 4-Leaf Cleaver & Sweet C)
After the interview, the girls headed off to practice where the crew and I met up with them later. The practice space is not air conditioned and was at least 85 degrees with 90 percent humidity. When we arrived, a woman was being carried out of the rink and taken to the hospital for heat exhaustion. This did not bode well with me. I should also mention that I like to pretend I’m small but mighty really, I’m out of shape and semi-pitiful when it comes to athletics.
I should also mention that when the director wanted to shoot me walking into the bathroom to change into my skating garb, I fell OFF OF MY SHOES. That’s right. Not my skates, my shoes. Yes, it was in front of everyone…and yes, they got it on camera. Kill me. 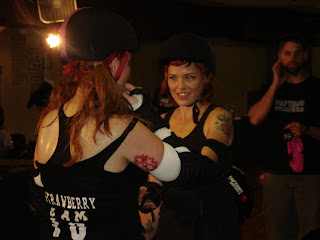 (Strawberry Jam helping me with my wrist guards. Behind me is their coach “Mr. Whip”, who was unamused with the Knitty Gritty crew disrupting his practice. This guy’s tough, and doesn’t appear to ever smile.) 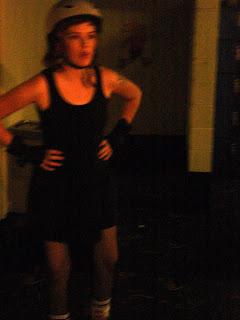 (Me–aka Erin Go Bragh-less–geared up. My camera sucks.)
Needless to say between my lack of skills (other than skating on the strand in high school, I really haven’t done much skating since the demonstrator days) and the heat, all glamor and vanity were lost for me at that point. I only fell once, but they totally (thankfully) babied me during our faux scrimmage. At my full speed (they’re walking speed) and only 4-6 laps, I was toast. Strawberry Jam was kind enough to tell me that I’m being modest about my suckage, because she saw me doing some hockey stops but really, I haven’t felt like that big of a dork since 5th grade P.E. when I was last to get picked for the Dodge Ball team. I totally have the roller bug though, and was pissed at myself for not training beforehand so I could’ve actually participated in a non-staged way. All in all though, it was a lot of fun and everyone was really nice.

On a different subject, if you’re looking for some sweet deals on beautifully made clothing, fellow ACMer Jesse is closing out all of her Amet & Sasha stuff so that she can go back to school. Check it out before the site’s gone in two weeks!

I’m off to watch The Zodiac Killer with my husband and knit an ipod cozie for a Michael’s ad I’m participating in. Oh and speaking of cozies, check a different version of mine out (along w/ a Q&A interview) in the current Creative Knitting Magazine.

Have a good night!