Yesterday was the Habitat for Humanity, all female build in Los Angeles. What an amazing experience! It was very cool being around so many strong, impressive, intelligent women who were using their powers for good. The event, which I gathered to be more for publicity than build progress, was way more chi-chi than most. Because it was backed by Hollywood moguls and organizations, there was great food (donated by Women in Film), a volunteer nursing staff, matching pink t-shirts and hard hats, and plenty of Cooling Mist Suncreen to go around (Julie Bowen, the face of Neutrogena, was one of the event celebrity leaders). Adrienne, who amongst other places has done builds in New Orleans, said that this was by far more glamorous than usual. None of the perks (including madatory breaks every couple of hours) from this site existed on others that she’d been on. This made me sad that there weren’t sponsors for every home being built through habitat in the U.S.–even if it was just for water and food. I guess I felt a little bit like I was cheating, being handled with kid gloves, and it was hard not to get frustrated when we were told to rest before finishing a channel that my partner Victoria and I were struggling with. My guilt subsided however when at the end of the day, tired and sore, the one hundred+ of us (including amazing leaders from AmeriCorps) managed to finish the entire first floor of walls for the first tri-plex of the Jimmy Carter Work Project. I definitely didn’t feel babied as we constructed, deconstructed, and then re-constructed a door-well, making sure it was up to code. Nor did I when, along with 10-15 other women at a time, we lugged 12 ft. wall frames to their place in the “finished” pile–even when sharing the weight with Miss World 1997 , who traveled from India to be there for the event. (I tried my hardest not to be bitter about how beautiful and glowing she still was, even with layers of sweat and dirt covering her. 😉 )

A few hours into the build, progress is made. 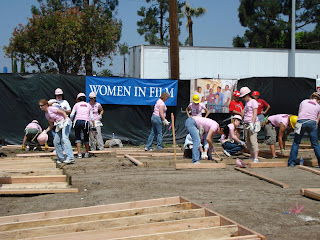 With building buddies Adrienne, Wendi, & Victoria
(It’s hard not to feel like a rock star when you’re wielding a hammer with kick-ass women who collectively run record labels, fight for women’s rights, and promote sustainable living and organic foods, AND also happen to be married to
members of Green Day, Social Distortion and Sugarcult!) 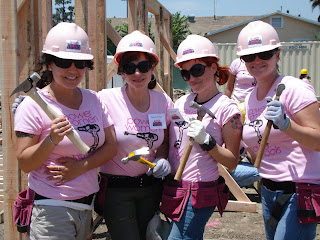 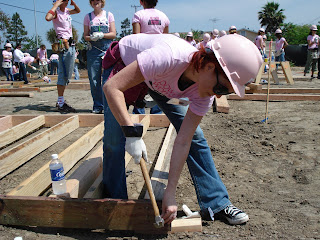 Before yesterday, I only knew the basics of how Habitat for Humanity worked: they build houses for people in need. I learned, however, that there’s a long application and interview process to determine whether or not a familiy is willing to put in 500 hours of “sweat equaity” towards building their own home and whether they want to make the commitment to pay off a no-interest mortage. These houses are definitely not handouts– the owners earn every nail that holds their new home together!
At about 3pm, several families showed up under the guise that they were visiting a site to see how it worked before they committed to the program. Several habitat big-wigs were there to speak, as well as the district council woman. What they didn’t know was that this was really a ceremony announcing that they’d all been approved for homes, with the promise that they’d be living in them by this new year’s eve. “Look around,” said Habitat LA’s CEO Erin Rank, “These are your new neighbors!” It was a phenomenal moment. What really struck my little group of gals is how not just one or two members, but ENTIRE families of 6, 7, or even 8 people, showed up to this event–a tribute to the value that this opportunity held for them. There wasn’t a dry eye in the crowd.

Pink Ladies Extreme
(Donning the pink toolbelts Adrienne got us all, from L-R
Rachel, Adrienne, Marki, Tami, Victoria, Wendi, me and Karen) 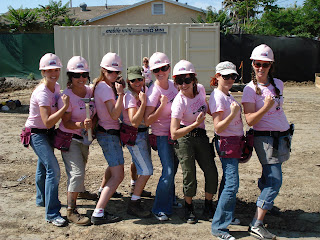 Along with one of the Extreme Makeover: Home Edition hosts, families raise the first tri-plex wall. 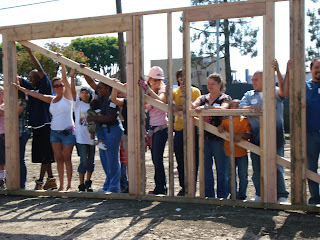 As the families raised the first wall together, I was so touched by the sight of a mother holding a baby in a carrier on her chest, pushing the first piece of her new life into place. I looked down at the bruise on my thumb (that I’d gotten that day from a hammer) with a sense of pride that I hadn’t felt in a long time, knowing that it wouldn’t be the last I’d receive from working with Habitat. In a sense, I’d found myself a new home, too.
To find out how you can be a part of the Habitat for Humanity chapter in your area, visit their website: http://www.habitat.org/