I made it back safely over the border and have been laying low with the family since. I’m juggling kiddos and our new, adopted kitten Seamus (shay-mus) today so I’ll make this short and sweet.

I had a great time as a guest on She’s Crafty in Vancouver. The host Wendy, and everyone else on the crew were all so freakin’ nice! The production coordinator Caroline, practically held my hand during the whole country-crossing debacle. At the end of the two day shoot, they presented me with a flask engraved with my name on it and, “She’s Crafty: Award for the Most ‘Impressive’ Arrival”. I *heart* it! 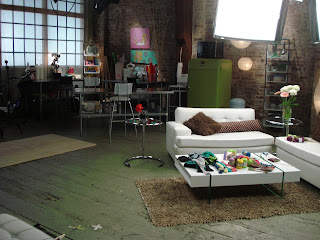 The She’s Crafty set isn’t in a studio at all but rather, a historical building. The brick walls, floor-to-ceiling windows and wood floors are all authentic, causing me much set envy. On the downside, there wasn’t air conditioning which made sitting under the stage lights pretty spicy!

The “She” in She’s Crafty 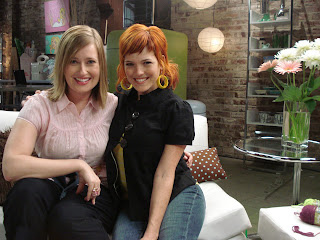 With the lovely host of the show, Wendy Russell. She’s great, HGTV Canada’s lucky to have her! Look for her appearance as Jennifer Garner’s character’s best friend in next year’s film, Juno. 🙂 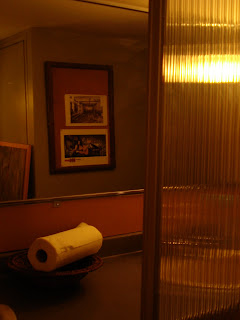 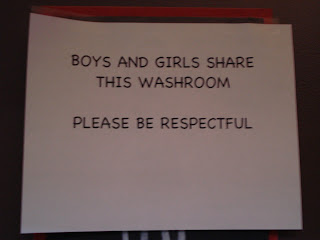 There was only one bathroom with two stalls in the building, so the men and women had to share. The above pictured plexiglass divider was in the middle of the room to separate the labeled, “boys only stall” from the side of the room containing the “girls only stall”. Also in this room, a huge map of Asia. Oh, those crazy Canadians! 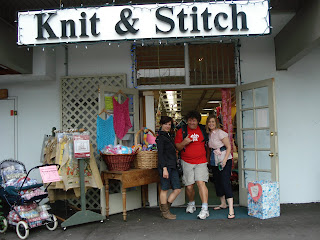 The 2nd day of shooting was spent in West Vancouver at their LYS, The Knit & Stitch. This is the director Stephanie and audio guy Mark posing in front of it with Wendy. The store was comfortable and had a lovely selection. I picked up some neon green, locally spun mohair that’ll likely sit in my stash for years until I get caught up on work projects. It’s totally impossible though, for me to spend time in a yarn store without buying anything!
Knitty Gritty doesn’t air in Canada so of course, they didn’t know me from Eve at this shop. Knowing this, it made me extra happy to find out that one of the clerks happened to be crocheting my market bag from the current Knit.1. Pretty cool. 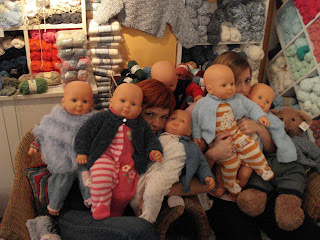 Delirium from a long shoot called for an E.T. inspired picture with all of the the knit store’s be-sweatered dolls.

Ok, the natives here are getting restless for brownies. More later!