Today officially kicks off the music portion of the SXSW (South by Southwest) festival. Over the course of the next 4 days, over 1600 bands will play multiple shows in bars, clubs, coffee houses, parking lots, stores… basically anywhere that has an amp-worthy power source. This is the week that Austin annually earns it’s title of “the live music capital of the world”–and let me tell you, never have you seen so many edgy hair cuts, boys with skinny jeans, girls with cowboy boots and skirts, and well, frankly, free beer.

In the past, I haven’t really participated in the festival because a.) it’s a madhouse (that we locals tend to avoid at all costs) and, b.) one might suggest that dragging two children from one deafening drinking hole to another is, ummm what is word…. oh yes: inappropriate. This year however, my boys will be with their dad for a couple of days, so I will partake. Yay!

Actually, the only real reason I’m venturing out of my recent hermit state is because a few of my friends will be here performing and I’m excited to support them. My friend Victoria’s husband Marko (from Sugarcult) is playing with his new band, The Playing Favorites tomorrow at the Suburban Home Records party. For you indie music buffs out there, members from Me First & the Gimme Gimmes and Lagwagon are also part of this band.
(Note:  For those of you who get annoyed when I talk about music, hang tight–I promise the knitting content is coming. :))
On Saturday, my buddy Leo Allen will be doing stand-up at the same, all day show at Waterloo Park that The Breeders are headlining.   For those of you playing along at home, two of The Breeders’ members are the Deal sisters, namesakes of the color “Kim & Kelley” in the my collection’s  ROCK yarn.  Some of you may also remember Kelley from when she was a guest on Knitty Gritty ( her project was the Swiss Darned bag).  Anywho, all this music-y goodness has me feeling mushy-gushy about the theme of said ROCK yarn so in honor of the festival, I thought I’d post a simple scarf idea knitted in one of the variegated colorways (Jonas).
Mistake Rib Scarf 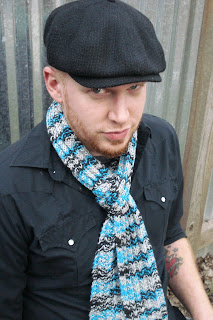 Snag this yarn here!
This is the perfect project to have stashed in your bag as you travel from venue to venue, and to pull out and knit while you’re waiting in line or listening to bands play.  It’s a simple, mistake rib pattern so it’s easy to memorize and quick to work up!  Here’s how:
Materials:
2-3 Balls (depending on desired length) of ROCK (Hemp/Soysilk/Wool)
Needles Size US size 7
CO 31 sts.  *K2, p2 to last st., k1.
Repeat this row until scarf  is desired length.  BO.  Weave in ends.  Vwoy-la, c’est fini!
Oh, and only because I’m proud that I learned how to make filled-in stars in Photoshop (thanks Jenny, for the tutorial!), here’s the postcard I whipped up to pass out this weekend. 🙂 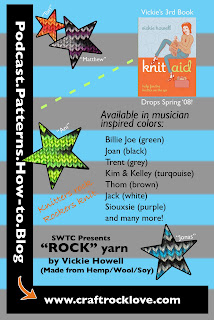 5 Responses to “Ode to Rock”