I was flipping through a copy of NYLON Magazine (the one with Scarlett Johansson on the cover) and randomly came across not one but TWO of my friends/former guests from Knitty Gritty, featured within its pages! It’s unlikely that the editors knew they were featuring a healthy dose of knitter in their “Music Issue” (because these particular stitchers also happen to be rock stars) but nevertheless it’s clear, Nylon *hearts* knitters. 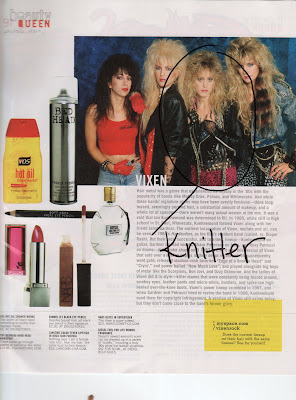 Share (Pedersen) Ross, former bassist of ’80s metal band Vixen and current front woman of Bubble, was a guest on the guitar strap and Janis Tank episodes of the show.  She’s also the author of the irreverently designed, Punk Knits. 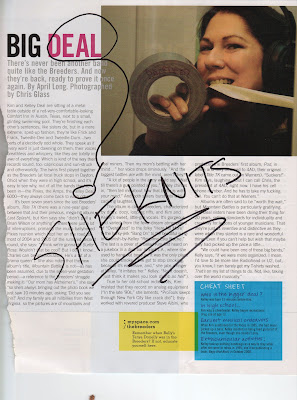 Kelley Deal of the Breeders (currently touring for their latest–and perhaps greatest– cd, Mountain Battles), appeared on a felted bag episode of the show, demoing Swiss darning (aka the duplicate stitch).  She’s also the author of the book, Bags that Rock: Knitting on the Road with Kelley Deal (which I was lucky enough to get to write a cover quote for), which hits shelves this November.

Have I mentioned lately how much knitting rocks?  Okgoodthanksbye.
xo,
Vickie