I’m so excited, ROCK and my “Hand Like a Hole” wristbands got a mention in the new issue of Alternative Press Magazine! It would make me so happy to know that musicians out there saw the blurb and started knitting-up projects out of my rock star inspired line. That would be freakin’ awesome! Band geek, much? 😉 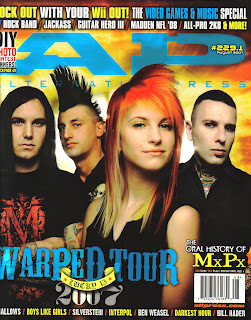 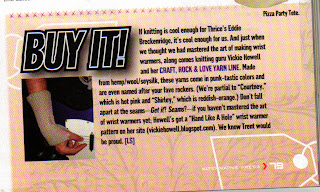 While I was at Waterloo Records grabbing a copy of the mag, I also stocked up on some new music, all of which is worth checking out (pssst!…you can sneak peak each of these bands on MySpace).

Girl in a Coma: Both Before I’m Gone

I’ve been a fan of theirs since a couple of years ago when I saw them perform in Austin at Emo’s. I dug them so much, I bought their demo but since then they’ve been signed by Joan Jett’s label, Blackheart Records!

I came upon them randomly through the Sugarcult MySpace page, when I was looking up the other bands playing at the Bay Area Indie Music Festival in August. I’ve been listening to them a lot over the past week.

2 Responses to “My Alternative”