Earlier this month I flew to Cleveland, OH to shoot my first season as the host and co-executive producer of Knitting Daily TV. It’s been 6 years since the last season of Knitty Gritty was shot, but walking onto a craft-show set again felt like coming home. I had a blast spending on-camera time with several of the industry’s smartest and most talented people, and am so excited for viewers to watch and learn from them! Here’s a quick, photo recap of the 4 days we spent shooting 13 episodes! 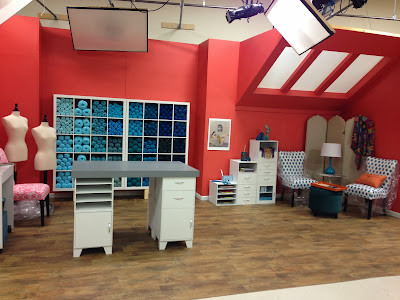 The set!
We wanted to give the new season and format a fresh look by giving the set a mini-makeover. We opted for mid-century modern-inspired, coral walls, clean white furniture for a loft-look, vintage knitting posters, and a Yarnspirations.com, shades-of-teal yarn wall. 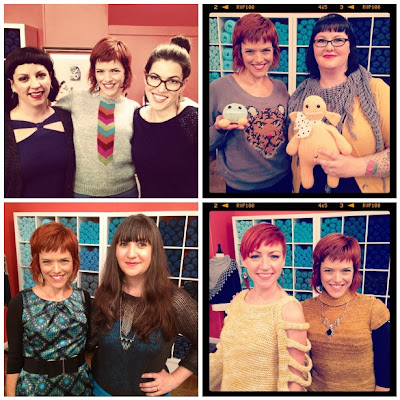 Mugging for the Camera
I had a great time with every single one of my guests (seriously), but here are just a few of them posing with me after their respective segment shoots (clockwise: Kelbourne Woolens’ Courtney Kelley & Kate Gagnon Osbourne; Designer, Rebecca Danger; Designer, Mercedes Tarasovich-Clark; Spinrite’s Julia Madill.) 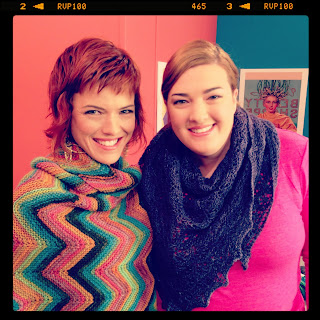 Tanis Gray
Amazing designer and former Yarn Editor for Vogue Knitting, Tanis Gray also joined the show this year as the product review correspondent for her regular segment, Tools of the Trade. 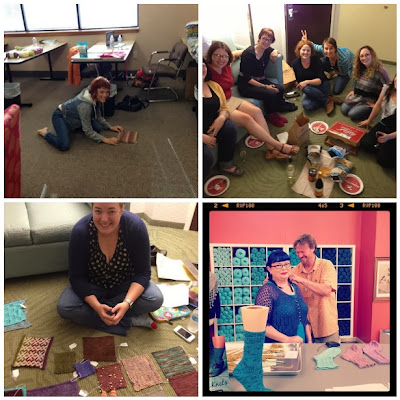 Behind the Scenes
Clockwise: Last minute blocking on the studio office floor; producer and guest pizza-party in my room; Tanis going over swatches for her segments; audio-guy, Kevin mic-ing sock designer, Andi Smith.

New Web Segment Feature!
This season of KDTV I’m thrilled to bring you 13 web-cam guests from around the world! From my home studio to theirs, we talk space-to-space about knitting, crochet, design and inspiration. Look for Stolen Stitches’ Carol Feller on the first episode! 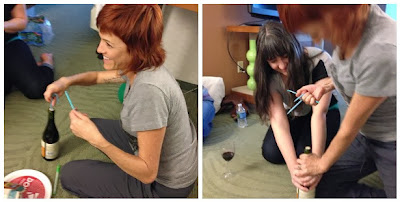 Living in a hotel, albeit briefly, has it’s challenges. One of which was discovered during an after-shoot hangout: there was a serious lack of wine bottle opener. Thankfully we had a cable needle, some elbow grease and the will to drink. The result was messy, but fruitful!

Stay tuned for more scoop on guest line-ups, pattern links and of course, full episodes of the show which begins airing in January on your local PBS station!