Apr
14
I am not a planner.  I don’t memorize things, I’m more comfortable with improv-ing, I work better under the gun, I enjoy game plans in concept only, and rarely finish anything before the 11th hour.  This trait often makes those closest to me crazy, but it’s part of my own brand of “plate-overfilled” denial.  It works for me.
In true “me” form, at 4pm the day before a scheduled Austin Craft Mafia photo shoot–I embarked on what in hindsight was probably, an unrealistic task.   I decided that I a.) wanted something new to wear so, b.) I needed to hand-knit (I’m still at the knotting and cursing stage with my knitting machine) that something (a cardigan) out of my Vegas yarn.  Yes, for the next day. Less than 22 hours from then…and, I wasn’t planning on staying up all night to work on it either–because nobody likes a puffy-eyed white girl in pictures. 😉
I cast on and knit.  And knit.  Then slept.  Took the kids to school.  Then knit some more. About 2 hours before Jennifer was picking me up to meet the mag peeps I had to come to grips with the fact that my cardi, was going to have to be more of a “cardette”.  I looked over at my mom who was in town for a vist and batted my eyelashes at her, asking if she minded finishing the ribbing on the sleeves so I could take a shower.  Thank the yarn Gods for crafty moms (and the top-down version of sweater design) or man, I would’ve been completely SOL!  She worked on the cuffs while I threw on some make-up and did the runner’s-stretch (aka the, “seriously, could you be any tighter?!” move ) in my newly washed jeans.  We’re now down to 45 minutes and I still haven’t fully accepted the fact that I don’t have a button band, ends aren’t woven in, there’s no way to close it, etc.
Unfinished, rolled edges are totally the new black, I decide–so I sew on a button under the boobage area and poke it through a non-existent hole on the opposite side, to get it to stay on me.  This is NOT good knitter’s form I know, but a gal’s gotta do what a gal’s gotta do, right?
It’s 10 minutes before lift-off and I’m still not happy with the way the top’s laying.  Maybe curling edges are more of the less-trend-setting brown, rather than the newer-and-hotter black?   Drat.  Think Vickie, think.  5 minutes.
Earrings!  Yes, earrings always make everything better.  I scrounged around an old jewelry box in my closet, scored a sparkly stud from my PGE (Pre-Ginormous Earring) stage, and poked it through the collar of my cardette.  Success!  Was it comfortable?  No.  Did it stay put, if I moved around my neck too vigorously?  Not so much.   But did it do the job for the time being, while creating a saucy, peek-a-boo neckline?  Why yes, yes it did. 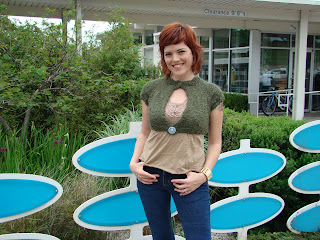 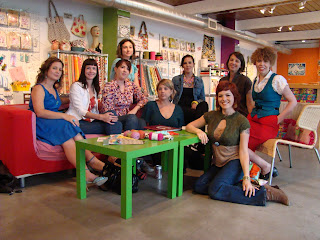 Since this picture was taken, I’ve unraveled the bottom band and the bust darts, picked up stitches and worked on knitting a torso. She’ll make her repurposed debut in normal-lengthed, cardigan glory in an upcoming video gig I’m working on.  As my best friend Tammy always says, it all works out in the end–or it doesn’t. One way or the other.

This time, it did. Sort of.
xo,
Vickie

14 Responses to “Knitting by the seat of my pants.”