Oct
08
Thanks to our awesome friends, we had a great time in NYC. The trip was an early birthday present for Dave, who’d never been before. The first two nights we stayed with my knitting friend Lori on the upper west side–who is always the loveliest of hosts– the last two nights, Adina let us borrow her Soho apartment while she visited her sister.

My husband’s a shopper so during the day, we spent most of our time roaming the streets of the village and mid-town, looking for unique boutiques and interesting restaurants. I assure you, we found more than a few of both. 🙂 On Wednesday night after I did a little work at Sterling, we went to the East Village for dinner at Cavern of Dreams. Thursday night, was a one-night only screening of the re-mastered, 25th anniversary of Poltergeist which still, in my humble opinion, holds its weight in the paranormal genre. Friday night, we met Adina and her man for drinks and Indian food. Yum and yum. Saturday night, Will F. was kind enough to put us on the list for Saturday Night Live. The host was Seth Rogen (who BTW, totally killed it with his performance and who Dave especially, is a big fan of and the main reason we chose that weekend for our trip) and the musical guest was Spoon (who, coincidentally is from Austin). As always, it was a blast! Lisa L. was also going to be in town for work, so we made plans to meet her and her boyfriend at the show. We all watched from Will’s dressing room until the band played, when we were allowed to come out on to the stage floor. My favorite moment of the night was when I looked up and saw Dave’s smiling face while he watched Spoon, with Seth R. on his left and Will Arnett on his left. Good stuff.

After the show, we headed to the After Party where the cocktails flowed and we got to chat with some of the cast, writers and friends. We stayed until about 4am, jumped in a cab with Will’s writing partner John Solomon (Will hung back to hob nob with Knocked Up/Superbad/40-year-old Virgin director, Judd Apatow) and headed off to the After After Party. We stayed there for all of 2.2 minutes when we thought better of missing our 7am flight in the name of another drink. Two more cab rides and the fastest packing job ever later, and we were on a plane headed for home. 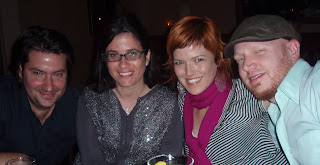 Dave & I at a Soho bar with Adina Klein (Knit.1 & Vogue Knitting) and her boyfriend, Chris. 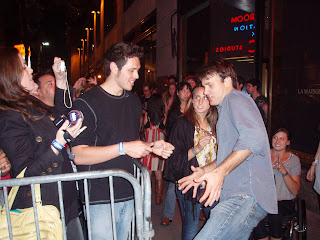 Will interacting with fans, after SNL. 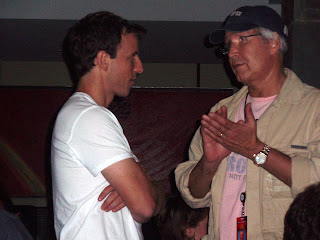 I took this shot of Seth Myers talking to Chevy Chase, because I’m a mom and I thought Seth may want the moment recorded. You know, for his memoirs. Because Chevy’s a legend. Thanks. 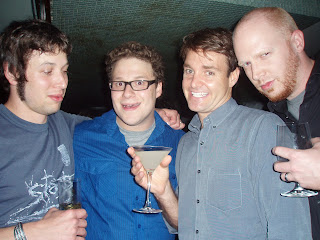 Dave at The SNL after party with Will, Seth Rogen and a friend. 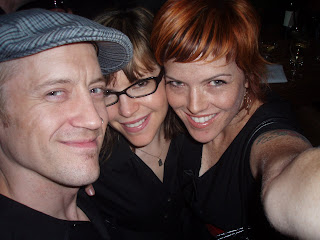 Me at the after party with Lisa and musician, Jason Freese (that night he played horn on SNL with the band, Spoon.)
Special thanks to Lori Steinberg, Adina Klein and Will Forte without whom this trip would’ve never come together so smoothly. I *heart* my friends.

Thank you for listening.