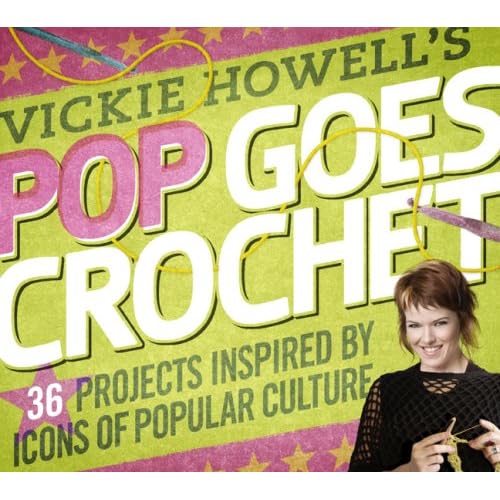 Ok, I clearly suck at math…apparently, even when it only involves counting.  THIS week, not last, marks 6 weeks until the first week of May when Pop Goes Crochet comes out.  I’m blaming the oversight on my pregnancy brain, but who really knows?  The good news though is, that it gives me an additional week to give away signed copies.  Hooray!

Ok, now for another little sneak peak.  The book is broken down into 5 chapters–Rebels, Icons, Fashionistas, Starlets and Rockers–all of which are filled with projects that are an ode to both the individual they’re named after and the versatility of crochet.
Those of you who’ve seen me at conventions and fairs probably recognize these tops, because I’ve worn them to death (the black version’s also what I’m wearing on the cover).  They’re comfy and versatile with a drop-waist that’s flattering to those of us who don’t necessarily want to draw attention to our midsections.  It’s made with SWTC/Vickie Howell Collection “Love” yarn (Silk & Bamboo) for drape and in 2, “T” shaped pieces for quick assembly.  Ladies and gentlemen, I give you…
Helena 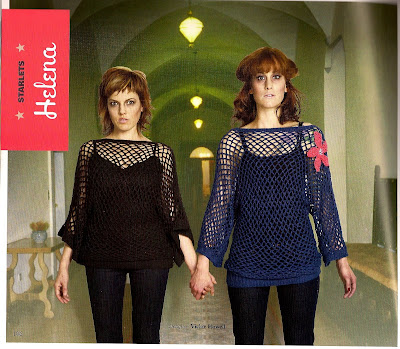 The mad musings of Alfred Hitchcock, Stephen King and Tim Burton, have seeped into pop-culture with the crimson impression of some of their famous fictional victim’s blood. If art imitates life however, it’s Helena Bonham Carter who’s the embodiment of the dark, often quirky beauty of cinematic thrillers and cult classics. These crocheted mesh tops invite you to become entangled in the web where fright meets fashion.

…And now, for a little insiders scoop: The other woman in this picture was never in the same room as I was. Due to unforeseen circumstances, we each had to be shot on different days. Thanks to the PhotoShop wizardry of art director Kristi Pfeffer though, my vision of the twin scene from “The Shining” was still able to come into fruition. Happy.

This is the 27th project in the book, so I’m going to give a signed copy of Pop Goes Crochet to the 27th person who E-MAILS their entry to: contests@vickiehowell.com, by 11pmCT on Sunday March 22nd.
Good luck and thanks for sneak peakin’!
xo, Vickie