In lieu of a belated convention report (the ladies over at Lime & Violet were all kinds of thorough in their’s so if you’re dying for the inside scoop, check their blog out!), I give you: a picture collage of the veritable cornucopia of goodies from CHA (Crafts & Hobbies convention), the Knit Out and Stitches West. 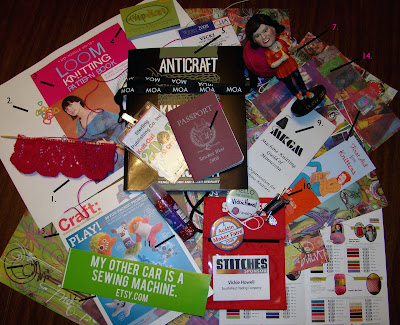 1. Fuchsia, lace-weight Malibrigo yarn.  Since I adore working with my SWTC collection of yarn so much, I don’t get out to buy other lines anymore that often.  Let’s face it though, I’m a knitter first and a designer second so if I see/touch an amazing fiber–I have to work with it!  Although I’ve never been a big lace knitter before, I think this yarn has officially converted me.  I luuuurve it!

2. Heart-shaped stitch markers.  What can I say, I’m a sucker for cuteness.  Not sure of the brand name, but I got mine from the Article Pract.  I also bought another product from them that I’m so excited about, I’m going to do a separate post on just it.  Stay tuned!
3.  Preview pages for Knitty Gritty guest, Isela Phelps‘ new book, “Loom Knitting”.    I can’t wait to see the whole thing–Isela never ceases to amaze me with what she can do with a loom.
4.  One of the books from Annie Modesitt’s Flip Knit series.  These are great, pocket-sized visual’s of Annie’s unique style of knitting.  See how it works here!
5.  AntiCraft, by Renee Rigdon & Zabet Stewart–a goth inspired collection of knit, crochet, and beading projects.  Emily Strange lovers, this one’s for you!
6.  Ravelry passport, from Stitches West.  The gimmick was pretty brilliant, actually.  You picked one up at the Ravelry booth and then had do get each page stamped by sponsoring booths at the event.  Once the passport was full, you were eligible for drawings for a bunch of prizes!  I didn’t so much get around to the booths to participate, but I did snag a passport as a souvenir.
7.  Kathy Cano-Murillo bobble head!  By far, my most treasured, convention swag possession. Crafty Chica has a new line of amazing, craft products that she was promoting at the Duncan booth at CHA, which is where I scored this bobbly beauty. It looks uncannily like her–even down to the painted blue toenails and the burgundy high-lights in her hair!
8.  Due to a printer snafu, Knit Aid wasn’t ready for the Knit Out or Stitches West.  So, we gave out
9.  The ladies of the Machine Knitting Guild of Minnesota gave me a lesson at the Knit Out.  More on that, later!
10.   Wee, handmade knitting brooch by Miknitures.   I opted for punky black & grey, but they come in pretty much any colorway you could ask for!
11.  I love working in an industry where it’s not uncommon to be handed a bottle of glitter glue as you walk the convention floor.  This one is called, Super Sparkly Big & Glitzy.
12.  Self-explanatory Etsy promo sticker obtained during a drinks “meeting” with my friend Christina Batch (Knitty Gritty guest and former editor of Adorn Magazine) who now works as a “VP of Making” for them.  Seriously, that’s what it says on her card. 🙂
13.  Latest issue of CRAFT magazine, that Natalie Zee brought me after the “Real Women Wear Knits” presentation at Stitches West.
14.  Mixed media artist Traci Baptista‘s awesome new scrapbooking paper–I *heart* her designs!  She was also at the Duncan booth, demo-ing how to collage over journals.
Crafty kisses,
Vickie
Ravelry: VickieHowell
Myspace: myspace.com/vickiehowell
Flickr:craftrocklove
Facebook: vickiehowell