We took part in the clusterf%$@ that was the Texas caucus on Tuesday.  As I’ve mentioned before, we live in a neighborhood that isn’t necessarily a beacon of suburban safety but decided anyway, to walk to the nighttime caucus site.  There’s something about this election that’s heightened my interest in community, so I wanted the experience of heading over to do my part alongside fellow south Austiners.  I envisioned my neighbors descending en mass onto our streets, holding signs signifying a new unity.   Alas, there wasn’t any of that, although I did see a lone campaign sign in a neighbor’s yard that gave me hope that we would actually have someone to talk to, should there ever be a block party.

The school that our precinct’s caucus took place at was also a primary voting location, so it was packed.  Apparently, not everybody’s as big of politi-geeks as we are, and didn’t vote early.
We had to wait until the very last person finished voting before the circus, I mean caucus, could begin.  They were set up to handle about 30-40 people…at least 300 showed. Even though this antiquated system has been in place since the beginning of American time, there didn’t seem to be any sort of plan on executing it.  Just figuring out how to get people to stand in line, required an hour and series of attempts by booed at volunteers.  It was a rough night.  4 hours after we arrived, we finally took our place at the cafeteria table that allowed for 6 people at a time to pass around the 1 sheet of paper that was allowed to be signed at a time.  We signed it, pledged our candidate allegiance and walked home in the dark, shaking our heads at the ridiculousness of the process.   I mean seriously, 4 hours to sign your name on the dotted line?  This wasn’t Ellis Island, people!  But I digress.
So, you say?  Sew, I say!  Check out my interview in the last issue of Sew News–that I think is still on stands.  I loves me the sewing and really appreciate the mag letting a knitter like me, be featured in it. 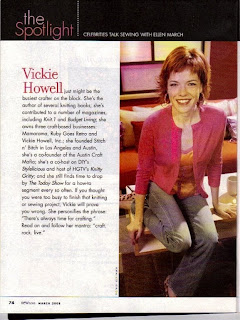 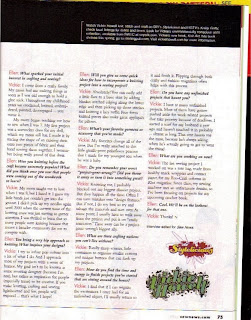 That’s it for now!