Jan
07
I finally finished the first draft of Catwalk Crochet over the weekend, so now feel like I can take a few moments to bask in the glow of awesomeness, that is my new bass guitar. *holding for basking*
I’ve been wanting to learn how to play for something like 15 years and now that my sweet husband surprised me at Christmas with this beauty, I have little to no excuse for letting another year go by without at least trying.  Excuse me as I geek out a bit about it:  she’s a Fender Jaguar with chrome detailing, a mint pick guard and mother of pearl (heh, I accidently typed purl at first) inlays.   Originally owned by The Skunks Jesse Sublett, a predominant figure in the establishment of the Austin live music and punk scenes, this bass has a great vibe about it.  Jesse also played in studio with Patty Smith, has written several novels and has a really remarkable story  of living for almost 15 years with stage four cancer. Anyway, you can tell that it was played by someone who loved and babied it, and I plan to continue the tradition.
Dave took hot-chick-sprawled-on the hood of a-Trans Am equivalent photos of the bass laid out on our deep purple bedspread.  Those photos alas, seem to be currently MIA–most likely lost in the great mother&*^%board crash of ’07.  That said, these will have to do. 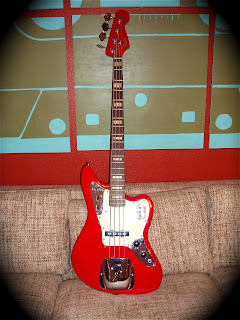 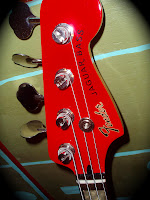 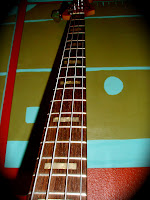 For those of you who listened to the last episode of my podcast with guest Kelley Deal, you heard her teasing me mercilessly about making me perform for her and her sister Kim (formerly of The Pixies) while The Breeders are in Austin in March for SXSW.  She challenged me to either learn Gigantic or Cannonball by then, so she could test me.    If that isn’t stress-inducing motivation, I don’t know what is!  I’ve been so focused on finishing the book though, that I’ve only practiced a bit.  I have the notes down for Gigantic, but not so much the pace yet. Wish me luck!  Guitar Gods know, I’m gonna need it!

Thank you for listening.  You may now return to your regularly scheduled crafting.
xo,
Vickie

7 Responses to “Bass Yourself!”

Howsabout I send you one of these boxes of happy today? Get 15% off your first box with code: FIRSTYAY15

Go to the link in my @vickiehowell profile, or to www.YarnYAY.com to learn more!

It's summertime, and we're ready for pops of color and poolside purling! This month we've put together a box of goodies for you that will give your summer stitching a fun, free-spirited vibe. Watch to see what's inside our July box!

Tap photos or go to the link in my @vickiehowell bio to get this 📦 box!