I’m back from a week on the road. Monday evening I flew into Charlotte, North Carolina for a shoot the next day at the Craft Yarn Council of America where Warm Up America HQ is housed. I’m not sure if I mentioned this before, but the Knitty Gritty Special that we’ve been shooting over the last few months is to benefit WMA. We’ve been collecting 7″x9″ knit squares from all of our guests (L.A. musicians, Tori & Dean, roller derby girls, etc.) to help create a blanket that will hopefully be auctioned of for money that will go back into the organization. In addition to the guest’s squares, producers have also been hard at work obtaining squares from the likes of Laura Leighton, Debra Messing and other celebs to go towards the cause. 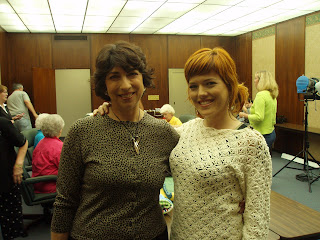 Me with Mary Colucci at Warm Up America in North Carolina
(Special thanks to the talents of Crochet by Faye for the top I’m wearing, which will also be featured in my crochet book in 2008!)

Mary Colucci (one of my absolute favorite people in the industry) who runs CYCA and WMA flew in from New York for the shoot and was kind enough to give us a tour through the facility. There’s nothing remarkable about the building itself–1970’s wood paneling, unflattering florescent lighting, generic decor– what is outstanding however, and much more important, is what comes out of that office. Illustrated by piles of pre-sorted knit and crocheted squares, is a spectacle of giving from hands across the nation. Ok, I realize how cheesy the last sentence was but when Mary pointed out packages still coming in with the “DIY Dept.” address from February’s Knit In, I’d be lying if I said I didn’t get a little misty inside. Apparently, over 3,000 squares from Knitty Gritty viewers alone have come in so far which roughly, translates into 60 blankets! Now maybe 60 doesn’t sound like a lot to you dear reader (it didn’t to me, either), but when the director of the Red Cross office we also visited explained to me that one of these hand-made blankets may literally be the first heirloom victims of disasters–who’ve lost everything they own–get to begin reassembling their lives with, it puts things in perspective. So, thank you to all of you who have and continue to participate in this program. I hope that with DIY’s support that this year, we can double the number for 2008! Here’s where to send your contributions: 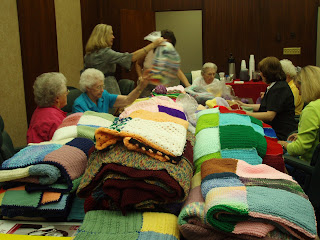 Local volunteers piece together blankets before shipping them out to various organizations.
On Wednesday morning, I flew home in time to do a little laundry and spend a few hours with my husband. Since flights are rarely direct back to Austin, I had a layover in Atlanta, GA. I don’t know if any of you have been through that airport, but it’s fairly large. I stumbled through it, tired, and as I often do pondering the absurdity of my life as a traveling knitter. I’m in the airport restroom washing my hands when out of the blue, someone taps me on the shoulder. Now I pause here to mention that it’s not uncommon for people to approach me in the lavatory. One time in Arizona I had a horrible cold and had escaped to the ladies room to wait until the coughing subsided when a woman, fearless of germs, walked up to shake my hand. But I digress.
Usually at this point, I’m internally kicking myself for not putting on make-up and undoubtedly otherwise looking like hell hit at 150mph, but as I looked up this time I saw perhaps one of the handful of knitters in the world who could rival my random adventures: the Yarn Harlot. I kid you not. 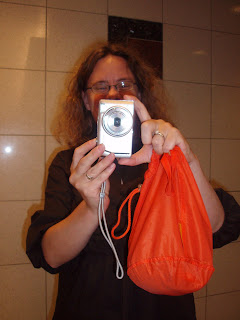 Like two knits crossing in the night, we shot pictures of each other in the bathroom. See her blog for the reverse shot. 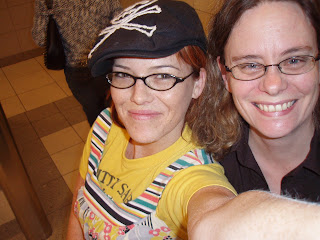 Stephany and I don’t know each other very well. Really the only time we’ve hung out together is when she was on my show. That day, in that place though, we threw our arms around each other as if we were family. Happy to have someone there who could relate to the fact that for a split second, neither of us remembered what city we were in. We swapped tips for traveling–Hers: Have 1 pair of pants for traveling in. Mine: A good hat will usually hide one’s bed-head. What are the odds though, that two sisters in yarn would be brought together in the South all because nature called?

Early Thursday I headed out for the last stop of the week: Northampton, MA where WEBS yarn store calls home. Kathy Elkins picked me up and took me a lovely patio meal at a local hotel before we headed over to the shop. I toured and chatted with her incredibly accommodating staff until it was time for the “yarn tasting” that people had come out for. Seated in the round was an intimate group of 50 or so that I got to visit and drink wine with for a couple of hours. It was my favorite kind of event. I much prefer a Stitch n Bitch-esque setting where I get to really talk to people from a comfy chair, rather than talking at them from a podium at a convention. I also got to answer lots of questions, chat about Knitty Gritty, show off some of the garments I’ve been working on, etc. It was a lot of fun. As always, I was really touched at some of the comments people made about the show and also, just that they cared enough to show up. One woman and her husband took off 2 days from work and drove 5 1/2 hours to meet me. I was blown away. I jokingly told her that there was nobody, who I hadn’t given birth to, who I’d drive that long to see so I really appreciated her doing so! Seriously though, it was so incredibly cool of her to do that. Thank you to all of you who made it out to WEBS and were full of questions. I loved it. 🙂

Ok, Stylelicious co-host Karly Hand is getting married in an hour and a half and I’m still sitting here in my robe. Gotta go!

11 Responses to “Adventures in Knitting”