We’ve been watching a lot of movies lately especially, while I’m working on projects for Catwalk Crochet. I finally saw Donnie Darko for the first time. I know. I’m 6 years late. I can only blame that on it’s release being around the time that I was a new mother. Anyway, my husband had been trying to get me to watch it for the past 6 months and over the weekend, I succumbed. I should listen to that man more often, themovie was brilliant. Also at Dave’s suggestion, we went to see the re-envisioning of Halloween. I’ve pretty much been over slasher movies since my years at Bert Lynn Middle School, but was curious about what Rob Zombie (writer/director) would do with this classic franchise. The first half was actually, really good. It focused on Michael Meyers as a child and how through an awful convergence of nature and nurture, was a sociopath from the beginning. The 2nd half was basically just a re-make of the first movie which in my humble opinion, made the movie too long and almost unnecessary. But I digress.

We also recently watched The Pixies documentary, loudQuietloud, which I highly recommend. Not only because of the awesomeness of seeing the legendary band playing together again but also, because Kelley Deal (sister of the band’s bassist, Kim Deal) was caught on camera knitting. For this reason, I consider the mention of their movie, semi on-topic and knit-related. Thanks for playing along.

Truly on the knitting front, last week we shot pictures for some possible kits we might be putting together for wide release. This one for what I like to call, the “Punky Bee-ster” baby sweater, just kills me. Is that not the CUTEST BABY EVER?! Special thanks to photographer Jody Horton, for letting us put his son to work. 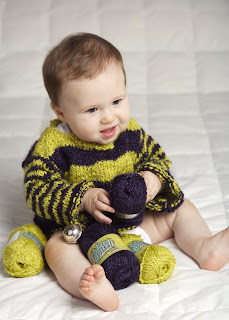 Completely unrelated to the aforementioned baby/yarn deliciousness , I have a bit of a cold I’m nursing. I leave for L.A. on Thursday for a shoot at Suss Designs and am hoping to not have to delight viewers with a Knitty Gritty Special segment centered on me, blowing my nose.

Apropos of nothing, the actress who played Gretl (the youngest sibling) in the 1965 movie version of The Sound of Music, would today be roughly the same age as Madonna. Coincidence? I think not. 😉

5 Responses to “A Yarn about Movies”