We got back over the weekend from taking the kids on a quick road trip to visit some family and go to Six Flags (hot, but fun–Tanner & I went on the roller coasters and my cautious little Tristan enjoyed the mellower rides with his motion-sickened step-dad), Wax Museum(creepy)/Ripley’s Believe it or Not Museum (interesting in a car crash kind of way)/Mirror Maze (pretty fun except for when Tanner ran full speed into a mirror–actually, that was a wee bit funny) and the Science Museum to see the Star Wars Exhibit (really cool–included original costumes, puppets models, a hover craft kids could ride, etc.).

Waxing Poetic with the big O. 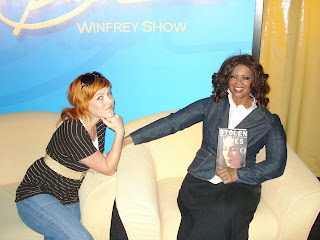 “Why yes, Oprah, knitting *does* in fact have a place in modern feminism. Thank you for pointing that out!”

During the trip I knit a felted scarf out of Vegas (which just needs some embellishing before it’s finished) as well as 1/3 of another Vegas scarf for a possible kit I’m putting together for a gig next year. I also cast-on for a purple, ribbed sock for Dave which I’m quite confident I’ll get the time to finish knitting at some point before we retire. 😉

Now, it’s time for a musical interlude. Check out my son on drums, who taught himself part of a The White Stripes song (sorry about the crappy, dark video–apparently the electronics in my life inly have a year in them before they start to give out):

Now back to programming…

For those of you who haven’t seen the 25th Anniversary Issue of Vogue Knitting yet, I highly recommend picking it up. It’s Ms. Adina Klein’s debut issue as official Editor-in-Chief of VK and she did a fantastic job! There are some beautiful patterns, memorabilia and articles on “Knitting’s Old Guard” and “Knitting’s New Guard“. I was very honored to be included in the latter, and thought I’d post it here for you to read (warning; it’s looooooooong, so grab your coffee, first!).
I find it really interesting that the “Old Guard” is compiled of amazing designers & industry pioneers ( Kaffe fassett, Alice Starmore, Mari Lynn Patrick and Meg Swansen), who possess comprehensive knowledge about the technical, design and application aspects of knitting whereas the “New Guard” is compiled more so (not to negate anyone’s abilities) of women who contribute in perpetuating the current popularity of the craft (Debbie Stoller, Stephanie Pearl-Mcphee, Clara Parkes, Shannon Okey & myself). I suppose that speaks a bit about what drives society (and in this case, the industry) in our media generation. Regardless, I appreciate how the differences between the two groups enhance each other, rather than canceling one another out. I also think that Teva Durham and Erika Knight deserve shout-outs for their contributions to the high-fashion realm of the knit-world. Nobody does it like they do!

In funnier news, all this time I thought that Clara Parkes was this wee, bespectacled, gray-haired woman in her 50’s or 60’s. I didn’t know until I saw her picture in this article that, for the past couple of years, at every TNNA & Knit Out, I’ve been waving and smiling at a woman who I *thought* was Clara, but clearly is not. Comedy. I need to drop her an e-mail and explain that *if* I ever didn’t greet the real her with open arms, it was totally my mistake and not a shun. I’m so lame sometimes.

Ok, I can no longer avoid the gym. I’m off–the Freshman 15 I’m carry around (I call it that because I’m still in the freshman stage of marriage that includes a lot of going out to nice dinners and drinking wine), isn’t going to lose itself!