I still remember the first time my family bought a Volvo.  It was the early 80’s in Colorado, when mom and dad loaded my baby brother and I up for a drive to Boulder to check out one that was for sale.  It was a late model, brick red, 2oo-series sedan–a sandy-haired college kid had apparently gotten in over his car payment head, and needed to unload the thing fast.  We happily drove away that day in our “new” car–I still remember my little hands using all of their might to make the industrial looking seatbelt click. I loved how we could see the sky when my dad cranked open the sunroof, and the fact that the air vents looked like Oreo cookies.

That trusty Volvo was with us for years, the gleaming novelty wearing off though as we ran up the mileage to the 300’s  and I became a surly, California teenager.  I shuttered every time I’d hear my step-dad pull-up in it, riding the clutch so the vehicle produced a sound vaguely resembling a creaky barge.  At 15, I vowed that Volvos were ugly, embarrassing tanks, that only out-of-touch parents drove.

Not our family car, but similar.
As I got older and became a parent myself, I grew to respect the durability and craftsmanship of the Swedish vehicles.  My opinion about owning one however only transferred from pubescent disgust to an adult prejudice.  After all I thought, Volvos were so bourgeois; only yuppies drove them (This philosophy enforced by scenes in movies like School of Rock, where the overwrought conformity of private school parents was symbolized by a line of identical and pristine 740 Turbos; or when Hugh Jackman’s character in Someone Like You, mocked Ashley Judd’s shallow relationship by sneering, “I hope you’ll be very happy in your Volvos with your matching, chocolate labs.”)
A few years ago, it was time to buy another car.  A friend of mine started preaching the Volvo gospel (like I’m doing now), convincing me that the stigma attached only applied in places other than our quirky, little town and that I should at least go look at them.  I agreed, test-drove several that day, and immediately fell in love with a fully-loaded, pre-owned V70 2.4T wagon.   I had just gotten a little money from Knitty Gritty so although I wasn’t a fan of the color (I’m not a white car gal), I bought it on the spot.  It was such a great car–really comfortable and safe, handled well and had plenty o’ room for the kids and all of their accompanying gear! Owning it for 3 years, completely converted me into a full-fledge Volvo fan.  A fact, that was concreted for life as of 2 days ago.
Over the weekend, my youngest son and I were in a serious collision at an intersection in Austin.  Without giving away details to a pending criminal investigation, our car collided with another, both of us going full speed, causing our car to do a 180 turn upon impact.    The entire front of the steel-framed wagon collapsed, 2 air bags deployed and the engine crushed.  My gorgeous boy, my beautiful unborn baby girl and me however, were able to walk away only a little sore and barely scratched–a fact that I largely credit to my Volvo.  The police confirmed later that had I been driving anything else, it’s likely that the steering column would’ve been pushed into me.  Miraculously though (or perhaps more accurately, thanks to phenomenal automotive engineering), the interior of the car remained a safe little bubble aided by the centrifugal force of the spin which kept us pressed against our seats–away from anything touching my stomach and keeping Tristan firmly, in his booster seat.  That car (and our seat belts) saved our lives and for that, I will be forever a loyal, Volvo customer. 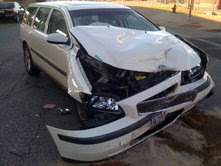 On a side note, huge thanks to the wonderful care of the Austin police and fire departments as well as the kind witness who held onto us until she was sure we were ok.
My thoughts are with the other driver who was unfortunately, driving a compact car.
Wear your seat belts people, cherish the moments you have on this earth, hug your children closer and if possible, drive a Volvo.
Much love,
Vickie