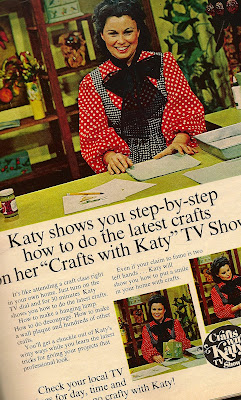 I was flipping through the Spring 1973 issue of McCall’s Needlework & Crafts (one of the many magazine treasures my friend Sarah Skwire sent me) and came across this advertisement for a TV show called, “Crafts with Katy“.  I thought I was up on my crafty host foremothers but I’ve never heard of her!  Aleene, yes.  Carol Duvall, of course.  But Katy, who are you?
According to the ad, had I been born 6 months earlier I would’ve gotten “a chuckle out of Katy’s witty ways” as she showed me how to “put a smile in [my] home with crafts.”  I would’ve liked that, I think.
I’m guessing Katy must be in her mid 60’s by now but since apparently in the 1970’s women hadn’t yet earned the right to have their last name recognized, I don’t actually know.  I’m curious though, where is this Katy now?  Is she still crafting?  How long did her show run? What does she think of her host daughters of today’s craft television?  Inquiring minds wanna know!
xo,
Vickie