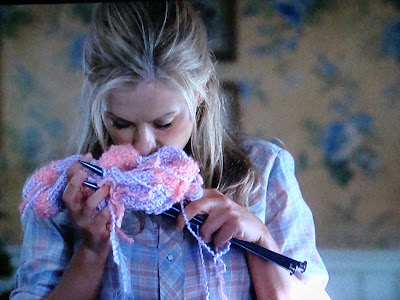 Ok, technically this isn’t a movie knitwear spotting (Television Tuesday’s, anyone?), but go with it.  Last night was the much anticipated season premiere of HBO’s vampire series, True Blood. Did you spy the knitting shout-out?  One scene depicted Anna Paquin’s character cradling a scarf WIP (work-in-progress) while packing away her murdered grandmother’s things.  Hey Sookie, you might want to keep those needles handy in case Bill’s new vamp-daughter decides to turn on you!