Dec
29
When we decided to tell the boys I was pregnant, we assumed their response would be similar to one they gave when we told them we were getting married, ” Cool!  Please pass the chips.”
We were mistaken.
Sitting at the dinner table, we told them that they were going to have a little brother or sister. Tanner (our oldest and usually the fairly nonchalant one) responded in the way that any mother would hope for: with misty eyes, a big smile and an arm hugging around my shoulder.  He said that he was excited, but worried that it would hurt me.  It was so sweet.
Tristan (our youngest and usually the fairly interested one) responded in a way that was both comical and heartbreaking: he said, his answer was “no”.  When we told him that, “Honey, we’re not asking for an opinion, we’re just sharing some happy news.”, he replied, “My vote is still no.”  Oy.
In the few days that followed, Tris refused to say the word “baby” when referring to what he clearly considered, an unpleasantness.  Instead, if the subject needed to be addressed, he’d simply give me a side-glance and point in the general direction of my stomach.  Heh.
The next week, he began saying the “b” word, but only accompanied by a little-boy-hand’s version of floating quotes.  “Baby.”  Seriously.
On the last day of school before winter break though, there was a wee bit of a break-through. He finally told his teacher that he “thinks” his mom “might” be having a baby.  This means he’s acknowledging the change to come, so I consider it a small success.  We’ll be bringing the boys to the ultrasound when we find out the sex in hopes that seeing the little bean responsible for making Tristan a big brother, will officially sell him on the fact.  He’s a smart, secure, loving little guy, so I’m not really that worried.    Clearly though, this is just the beginning of the adventure that living with 3 children is sure to provide!
Speaking of “living”, the magazine of the Southern persuasion is featuring the Austin Craft Mafia in the Texas edition of the January issue.  We were actually fairly surprised when they asked us–thinking that we’re not really the Southern Living demo–but since we do technically reside in the south and are all living, I suppose that was an error in judgment on our part. 😉
Here’s the article.  You may remember this shoot being the time I didn’t even come close to finishing the cardigan I was planning on wearing (the finished one I later wore in all of the Knit Aid promos), so I wore it as a walking WIP instead. And yes, that is an earring holding it closed that the top.
The 1st picture cracks me up!  The look on my face says, “I love arranging yarn on a shelf.  It makes me feel zen.” 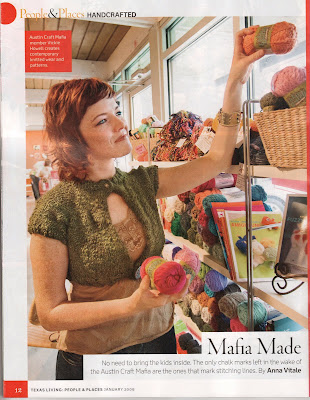 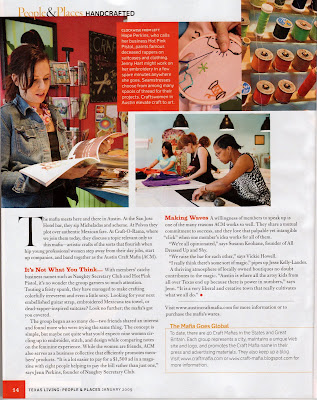 With that, I bid you adieu for now.  I’m off to write the next Eco-Craft column for Kiwi.

Hope you had a happy holiday!
xo,
Vickie

Howsabout I send you one of these boxes of happy today? Get 15% off your first box with code: FIRSTYAY15

Go to the link in my @vickiehowell profile, or to www.YarnYAY.com to learn more!

It's summertime, and we're ready for pops of color and poolside purling! This month we've put together a box of goodies for you that will give your summer stitching a fun, free-spirited vibe. Watch to see what's inside our July box!

Tap photos or go to the link in my @vickiehowell bio to get this 📦 box!