It’s a frosty 33 degrees here today, which I know for you mid-westerners out there must sound like summer vacation weather but for Austin, it’s flippin’ cold.  Since even in the winteriest (just play along and pretend that’s a word, please) years we still only get about 2.5 weeks total (the entire year) of this type of shiverment (can also be spelled: shiiiiiiverment), we Austinites tend to not always be properly prepared.  Case in point, the only warm jackets I own were purchased in 2007 solely for the purpose of leaving Texas for a January, Northeastern book tour and Vermont Craftstavaganza Holiday Special tv shoot.  These jackets while very useful during the below-freezing circumstances of yesteryear however, today, are only partially competent.  It appears that the morphing body shapes involved in impending babydom are unbefitting for an otherwise perfectly acceptable puffy coat.  Stuffed into the garment (which stays on thanks only to one, over-achieving snap), I look vaguely like that kid from A Christmas Story…if he were to dress-up now (as a 30-something man) in that same, child’s snowsuit.  The glamor, has left the building.  Oh, and apparently so has the vanity (see picture below).

Not that I would be able to find an attractive preggie coat, should I want to invest in one.
Bear with me for a moment as I rant… 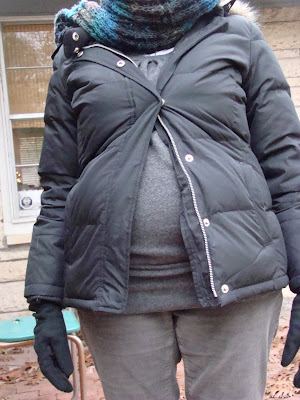 You know, I’m pretty much a veteran when it comes to the indignities of life, post-motherhood.  Having naked-boy buns seemingly in my face on a daily basis: no problem. Having my undergarments revealed to a convention center’s worth of attendees, by a child trying to hide under my skirt: I survived.  Hell, I’ve even come to peace with he knowledge that I’ll never be able to sneeze again without crossing my legs.  Why though I ask you, WHY in the name of all that is fashion, has (affordable) maternity clothing not improved in the 7 years since I needed it last?!  I mean seriously, people–I know there’s the demand; WHERE’S THE SUPPLY?  Where’s the Project Runway maternity challenge with the winner’s line for sale on Bluefly.com?!  Seriously.
I keep hoping that Gwen Stefani will randomly take pity and send me all of her child-bearing couture.  Until then though, I’ve officially changed my clothes-buying mantra from, “Wow, this looks great.  I’ll take it!” to, “Well, this doesn’t make me want to burst into tears, so I should probably get it.”.
That is all.
Vickie